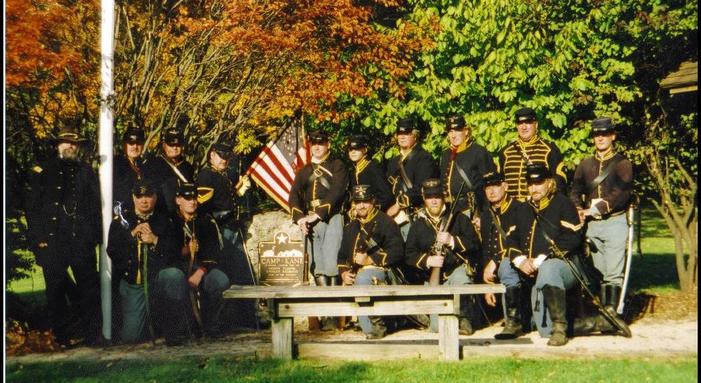 On  September 20, 2014, The City of St. Charles officially rededicated the lower portion of of what has been known as Langum Park back to Camp Kane. With the relocation of the Jones Law office to Camp Kane, efforts to draw attention to the historic significance has begun. We are pleased to announce that on April 20, 2015, the St. Charles City Council officially landmarked Camp Kane as a historical site.

Several Years ago a memorial was added to the site. Time was not kind to the memorial. On November 11, 2017 a Ribbon Cutting was held to open the new Camp Kane Memorial to the public.  This was one of the key phases of the Camp Kane Comprehensive Plan. We are grateful for grant funding from the Community Foundation of the Fox River Valley and the St. Charles Visitors Cultural Commission, along with donations from the Elias Kent Kane Chapter of the National Society of the Daughters of the American Revolution, the 8th Illinois Cavalry reenactors and private donors. The next phase will be the outdoor education center.  Grants and donations are being sought for this project as well.

Another phase, one that will have a major impact, is the plan to construct an Underground Railroad and Civil War Discover Center on the property using the exterior of the original Farnsworth Mansion, that was dismantled in 1992. The Discovery Center will tell the story of the Underground Railroad and the Civil War from a local, county, state and national level. It will also call awareness to the importance of the Historic Preservation.

Events will be held periodically at Camp Kane, including Civil War Training re-enactments. Please check back with us for future dates. We will also be happy to schedule field trips and educational events, just contact us to arrange those events.

Donations are being accepted to help develop the Camp Kane Campus. To find out more please visit

THE HISTORY OF CAMP KANE

THE FUTURE OF CAMP KANE

Colonel Farnsworth was close friends and political allies with Joseph Medill, Chicago Tribune Editor and co-owner. Medill was also an abolitionist and used the Tribune for the cause. Once approval was granted to form the 8th Illinois Cavalry, Medill promoted recruiting  in the Tribune. By August 20, 1861 the first company of the 8th Illinois Cavalry was formed and most the members of that company were employees of the Chicago Tribune including William Medill, Joseph's brother.

Camp Kane officially opened for training on September 18, 1861 with 1,164 men who mustered in. It was the only Civil War Training Camp in Kane County. It first became home to the 8th Illinois Cavalry and later the 17th Illinois Cavalry.

General Farnsworth and Colonel John Beveridge commissioned the 17th Illinois Cavalry in early 1863. Most of their service was in Missouri. They trained at Camp Kane in the early months of 1863 and Camp Kane remained an active training camp until early 1864