THE FUTURE OF THE JONES LAW OFFICE​

The Camp Kane Heritage Foundation is thrilled to have the addition of the Jones Law Office to Camp Kane. Between 2015-2016, restoration of the building was completed. We are very grateful for the assistance by the City St. Charles regarding the move of the building to Camp Kane and paying for the slab in which it sits. We would also like to acknowledge and thank Mrs. Pat Pretz for all her efforts in raising funds for the restoration and coordinating the work done. We are so very thankful for those who donated to the restoration. We would like to give special recognition to: The Elias Kent Kane Chapter of the National Society of Daughters of the American Revolution, The Thornapple Questers, Preservation Partners of the Fox Valley and all private donors, for helping restore this important part history.

Although most of the time you will not be able to enter the building you can see in from the windows. If you look through the window on the north side of the building, you will see a section of the south wall that is not painted over. That section actually shows some graffiti that was done by soldiers who deserted, were captured and were held at the Law Office.

​   On April 20, 2015 the St. Charles City Council officially landmarked the Jones Law Office. This status will protect this building ensuring it will be around for many future generations. Informational signage has been placed by the Law Office that tells of the building's significance.  We would also like to thank the Thornapple Questers for being docents over the summer of 2017. Their efforts helped educate those who stopped by to learn more about the Jones Law Office.

We encourage you to stop out and view the Jones Law Office, visit the Camp Kane Memorial, have a picnic, bring a kite or fishing pole, learn a little history and enjoy the beautiful scenery that Camp Kane holds.

To help maintain the Jones Law Office and Camp Kane, help develop the Camp Kane Learning Campus and the creation of educational programs please make a donation to the Camp Kane Heritage Foundation.

THE HISTORY OF THE JONES LAW OFFICE​ 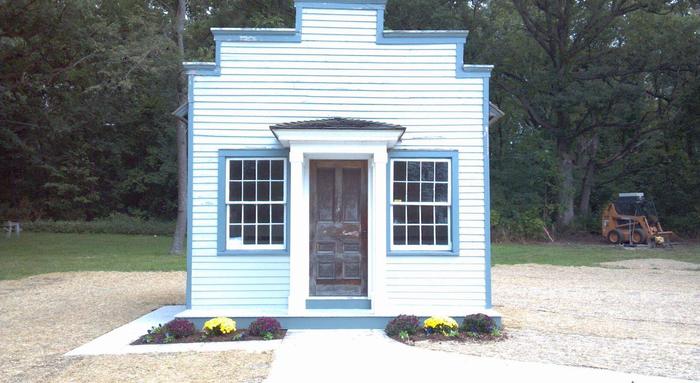 In mid 1838 Steven S. Jones arrived in Charleston Illinois (the original name of St. Charles). He was the first attorney in the Fox Valley. In 1839, Jones brought to the founders' attention that there already was a town called Charleston in southern Illinois. He made the suggestion to call the settlement St. Charles.

Jones purchased the property on the Northeast corner of 5th Ave and Main St. on April 8, 1843. A small 14X18 structure was added shortly after. That structure was Jone's law office. It is believed the porch was added in 1860. During the Civil War the Law Office served as a holding cell for war deserters.

Some think that the 14X18 structure could actually be the original Kane County Court House that was abandoned in 1843 after the new court house was constructed. No one seems to know what happened to that structure and the descriptions of both of those buildings are very similar, but there is no proof that they are one in the same.

In 1987 Jane Dunham had the building relocated to the Dunham Hunt Museum at 304 Cedar Ave. It remained there until the Museum closed and was sold and restored back to a single family home. On August 26, 2014, the City of St. Charles moved the Jones Law Office to Camp Kane.