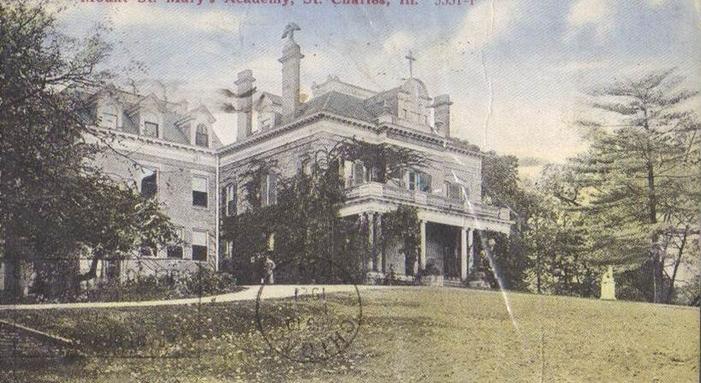 THE PAST & FUTURE OF

John F. Farnsworth came to St. Charles in 1845. He was one of the founders of the Illinois Republican Party along with Joesph Medill, of the Chicago Tribune. Farnsworth and Medill were close friends and political allies. They were very influential in convincing Abraham Lincoln to run for President and getting Lincoln elected. Farnsworth consulted Lincoln during the Lincoln-Douglas debates and it was Farnsworth who nominated Lincoln for President.

Lincoln was not the only thing Farnsworth and Medill had in common. They both were strong abolitionists and Farnsworth who was also a Congressman worked towards freedom for the slaves and Medill used the Chicago Tribune to promote those efforts publicly.

In 1860 Farnsworth built a beautiful stone mansion on a hill located off of what is now Rt, 31. It is believed that the Mansion was built by William Beith, a well known mason and was believed to be an abolitionist as well. It is also believed the mansion was an Underground Railroad stop.

Over the years the Farnsworth Mansion changed owners, a fire occurred in the 1880's and some changes to its appearance were made. Then in 1907, the Mansion became Mt. St. Mary's Academy and was used as a girls boarding school. In 1910 an addition was added and later a school was built on the property. The Mansion was used to house the students and nuns.  In the 1970's the property was sold to Valley Lutheran High School and the Mansion was used as a Thrift Shop.

After several years of neglect a developer purchased the property and dismantled the Mansion with the intention of using the pieces in one of the homes constructed on the property. This was allowed due to the lack of a Historic Preservation Ordinance.

In the years that followed the demolition, a Historic Preservation Ordinance was approved, the developer went bankrupt, the property was purchased by another developer and the pieces of the Farnsworth Mansion were donated to the City of St. Charles. After some research it was determined that constructing the Mansion at Camp Kane and using it for an Underground Railroad and Civil War Museum would be the best use. It is with great focus and passion that    the Camp Kane Heritage Foundation will work to make this amazing project a reality.

This project is not just a local project, it is a County, State and National level project. We need your help to make this happen. Your donations will help. If you work for a corporation that supports projects like this please contact us. Funding needs to come from many avenues and we appreciate any help we can get.

Please visit us often as we will be updating this site with additional information as plans become available.

​Thank you for your interest!